Posted by unclov on October 6, 2019 in Uncategorized | Comments Off 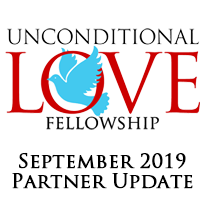 Through your gifts you and I together are loving people to life.

I am sorry to tell you that this month there will be no partner message. We are having problems with AT&T involving our phones and the internet that have brought everything to a standstill. If you have called the office last week (which is the time of writing this) you might have been unable to get through and that is the reason.

I recorded the message I had for you but it came out blank and so with the Bible school coming up in a few days I decided that we would send you a letter without the message. These things are outside of our control and AT&T takes its own sweet time!

My message was centered on Gideon who was beset with enemies that harassed him. He had taken the posture of a victim trying to survive hiding his harvest in unlikely places and hoping the enemies would not find it. He came crawling out from the hiding place and the Messenger of God was sitting under a tree waiting for him. He addresses the frightened young man with “The Lord (I AM) is with you mighty warrior!” These were strong words not reflected in our English translation. The “mighty or valiant warrior” meant a small army of warriors – maybe a small team of Navy Seals! The kid hiding his stuff did not look anything like that!  And the declaration that the I AM was with him – meaning joined with Him in this moment to be all that he needed Him to be – was the opposite of Gideon’s thinking.

He responded to the Messenger with a whining account of all that God had been to Moses and Joshua and in the light of his present condition barely surviving the attacks of his enemies it appeared that God had forsaken and abandoned him and all his tribe. It was a contradiction of what the Messenger had said and a definite disagreement with God – in Gideon’s mind I AM was not with him or anybody he knew!

Now here is the interesting thing; the Messenger ignored him and all his negative accounts of what was happening. He went on speaking as if Gideon had said nothing! The scripture tells us that “He turned and looked at Gideon” – he looked him straight in the eyes with a look of love and patience, dare I say with a twinkle in his eye as if enjoying the discussion! The Messenger said that Gideon was to go in this his strength and he would defeat his enemies. What was Gideon’s strength that he was to go forth in? It was what the Messenger said in his greeting that Gideon was under the guard and strength of I AM who was committed to him and a mighty warrior.

Gideon would define himself and God by his circumstances. But circumstances are not the standard by which we decide whether God speaks the truth! He is His own witness to truth and faith is taking our stand agreeing with Him against our circumstances (and behavior) that would disagree with Him.

Gideon turns the conversation to himself addressing the announcement that he would defeat the enemy. One old translation has it “Excuse me?” as if to say “Are you insane?” He began a new list of negatives concerning his family. They were the smallest and most insignificant of all families and he was the youngest of this most pathetic family. To think that he, Gideon would be able to do anything to defeat anyone was ridiculous. His family must have been a negative bunch! If any member suggested doing anything beyond the boundaries set by their ancestors they would be promptly shut up “Know your place boy!” “That’s not for the likes of us!”.

Notice Gideon had again disagreed and contradicted God’s word by balancing the message with his family and place in society. It was in fact time to take his stand with God against the wisdom of his ancestors.

The Messenger, who it becomes obvious by this time is realized as I AM disguised as a traveler under the tree, ended the conversation where it started. He assured Gideon that He would be with him and the enemies would be defeated easily.

What arrested me is how easily and quickly, almost naturally and without apology Gideon disagreed with God’s evaluation of him and dismissed all that was said as not applicable to him in these circumstances. People have not changed and vast numbers of the church read and hear God’s word in the same dismissive way.

He has placed us in Christ and now assures us of His triune presence within us through the Spirit; He has assured us that sin is a past issue for the Lamb of God has carried away, lifted sin off us. He is our life and inside Him we have real functioning fellowship with the Father and Son and Holy Spirit. He has announced Himself as our peace beyond human comprehension, joy that is beyond words and strength in which we can do all things in Christ our strength and ability. The “all things” are the ups and downs and chaos of life around us and coming at us. He declares us the light of the world, the salt of the earth while we live in the consciousness that greater is the One within us than all that threatens us. That is just a sampling of His word to us! Let the Spirit awaken us to the truth of His words that we agree and stand in contradiction to our circumstances and if need be our peers and family.

The truth is the truth whether we believe it or not! Gideon won a decisive victory over his enemies because I AM is true and Gideon came hesitantly to stand agreeing with I AM against circumstances and his ancestral negativity.

At another time Israel wasted an entire lifetime refusing to agree with God who declared the same to them as to Gideon while they insisted that they were no more than a bunch of leaping grasshoppers!

Wake up to the reality of who you truly are by God’s grace in Christ and walk in the earth as the beloved of God and mighty lovers.

I trust that you get the burden of my heart – His word to me – to be who I am in Christ.

The big news this month is that we are presently slashing the price on all CD’s on our web page by 50%! This is not a going out of business sale or the end of our selling CD’s but an attempt to get the message into the hands of people at a price they can afford. We have many plans for expanding our media presence in the world which we will share with you over the next months but for now go to the phone and call the office and place your order!

I have just returned from Albuquerque New Mexico after some very wonderful and productive meetings there. Thank you for upholding me in prayer as the Spirit brought me to your mind. I am in the final stages of preparation for the Bible school on October 11th and 12th coming up within the next hours. I believe that it will be a life changing time for the class of nearly 60 students. This message is not just a comforting word but a transforming truth that plunges us into the Gospel that took over the world at the beginning.

If you have not yet registered for the retreat in December call the office at once and make your reservation as time is rapidly running out. I will be speaking on the Radical Grace of God. I believe that the Spirit will open your eyes to understand and realize grace as you never have before.

Thank you as always for your faithful giving that monthly enables us to carry this message of God’s love to the world.

We will have a message next month I promise.

You may also listen to past partner mp3 messages by visiting: http://unconditionallovefellowship.com/partners/mp3-archives/

The blessing of the Lord be with you all –